Welcome to Naples Airport in Italy 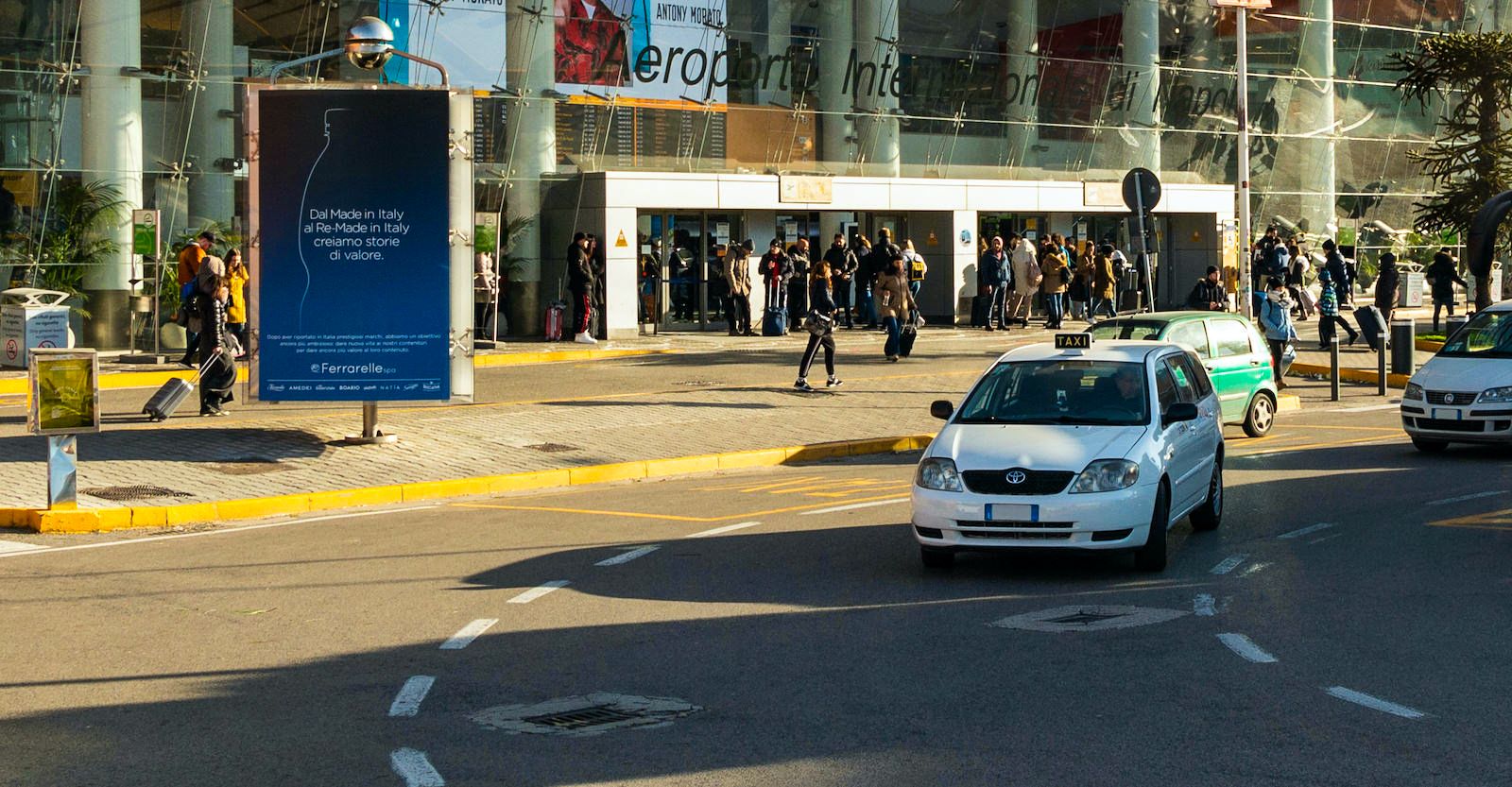 Know Before You Fly: Top Tips When Taking Taxis From Naples Airport To The City

Naples is currently competing with Rome and Milan and other major Italian cities for the title of most popular destination for tourists in the country, as it offers a perfect blend of old world charm and one-of-a-kind sightseeing treats with modern attractions for visitors including restaurants offering great food — just as you’d expect from the birthplace of pizza.

Most international travelers coming to the city will first land at Naples International Airport, which is located a distance of about 2.3 miles (or 5.9 kilometers) from the city center. There is no train or subway connection between the two locations, although buses and taxis are on offer. Because it’s such a short distance, many people find taxing a taxi to be the better option.

The helpful guide below has all the information you need about taking a taxi from Naples International Airport to the city, including how to find taxis once you’ve arrived and are ready to head to your destination, total price, the amount of time it will take, and even tips on how to avoid scams from drivers who might try to charge you more than you actually owe.

Taxis are easy to find at the airport once you’ve arrived because they all wait in the same designated area. After you have landed, cleared security, and collected your bags then you should look for the clearly marked signs pointing you in the direction of the taxis in the arrivals area. Here you will find a queue with other passengers served in order of showing up.

In Naples, taxis tend to be white in color so they are easy to find. The correct size taxi that you will require will depend on how many people you are traveling with and how many pieces of luggage you have. If your group numbers more than four people you will have to take two taxis to handle the larger number as well as the luggage as you won’t all fit in one regular taxi.

Be aware that some unlicensed drivers might approach you at the airport asking if you need a taxi. If this happens you must always either ignore them or politely decline and stop talking to them. These are not registered or authorized airport taxi drivers, and they make their money by charging unsuspecting tourists far more than the taxi should cost. In addition, because they are unlicensed, if they get into an accident your medical and other expenses might not be covered.

If you would prefer to organize your taxi in advance, or if you have questions about taxis from the airport to the city, you can call these operators that all offer dedicated service:

If you’re traveling from Naples International Airport to the city center then typically a flat rate will apply which will be about €16 to €18, or roughly €20 if you’re traveling to the harbor. But the flat rates do not apply if you are venturing to distances further away, because for those locations the driver will switch on the meter and the total cost will depend on the total miles traveled.

Be aware that taxi journeys from the airport to the city can involve a number of surcharges which will be added on top of either your fixed rate or the metered rate. Be sure to ask your driver before you leave the airport whether any surcharges apply and how much they will cost, so that you can be sure you are being charged an honest fare for your journey. Things that drivers charge extra for include transporting pets or other small animals, taking a ride between the late night hours of 10pm to 6am, and even traveling on public holidays or Sundays.

Tipping should be considered part of the cost of the fare regardless of whether you are paying a flat rate or whether you are paying by the meter. If you had a safe journey with a courteous driver, who may or may not help you with your bags, you should consider tipping a few Euros in cash and make sure that you round up the tip to the next highest round number.

Because Naples International Airport is not located very far from the city itself, you can expect the average journey time from getting in the taxi to getting out at your final destination to take about 20 minutes. It might take slightly less time if you are traveling late at night or outside of rush hour, but it might take more than 20 minutes during peak times with heavier traffic.

Although many official taxi drivers in Naples are very reputable and will get you to your destination for a fare rate, a handful of bad drivers do try to make extra money off tourists who they think it will be easy to cheat out of some extra Euros, so be aware of scams.

One trick that drivers might try to do is to give you less change than you are owed, for example if you use a €50 Euro note to pay for a €10 fare, the driver could try to give you less than €40 in change. The best way to avoid this happening is to say the fare out loud when you are paying, then say the amount of cash you are giving the driver, and count the change out loud.

Another trick that some drivers try to do is to take you on an unnecessarily long route to your destination in order to drive the meter fare up, because meters charge by distance. This won’t apply if you’ve agreed a fixed rate with the driver before the journey starts, but it could happen if you are on a longer journey for which fixed rates don’t apply. Consider researching the most direct route online before your trip and printing out the directions and making the driver use them, or use your smartphone’s GPS to also direct the driver on the quickest route.

DISCLAIMER – This website is not the official website of Naples Airport and is an independent guide to the airport.

Scroll back to top Do NOT follow this link or you will be banned from the site!